Don’t usually post thank you in this section but thought this was so nice wanted to share with you guys. 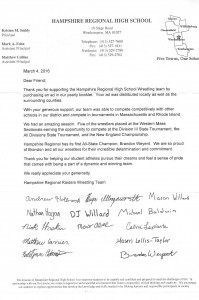 Thank you for supporting the Hampshire Regional High School Wrestling team by purchasing an ad in our yearly booklet. Your ad was distributed locally as well as the surrounding counties.

With your generous support, our team was able to compete competitively with other schools in our district and compete in tournaments in Massachusetts and Rhode Island.

We had an amazing season. Five of the wrestlers placed at the Western Mass Sectionals earning the opportunity to compete at the Division III State Tournament, the All Divisions state Tournament and the New England Championship.